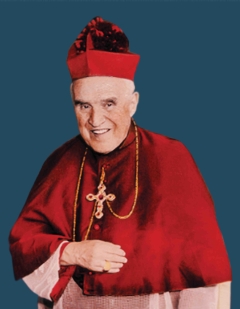 Stephen Ferrando was born in Rossiglione (Genoa) on September 28, 1895. His parents were Augustine and Josephine Salvi. As a small child, he attended Salesian schools, first at Fossano then Turin. He was fascinated by Don Bosco's life and asked to become a Salesian.

He made his first profession at Foglizzo Canavese (Turin) in 1912. During World War I, he served in the medical corps, and received the Silver Medal for Valour (Versie-Corite, 1917).

At the end of his theological studies, he was ordained a priest in Borgo S. Martino (Alessandria) in 1923.
His request to join the first Salesians going to the Assam region of India bordering Tibet, China and Burma (1921/23) was granted. He was Director of Novices and rector of the studentate of philosophy and theology for ten years. As a good son of Don Bosco, he went into the villages with his young Salesians, organizing festive oratories for the youngsters and in this way learned the language.

To his great surprise, on July 9, 1934, Pius XI named him first bishop of Krishnagar. On November 10, 1934, he was ordained bishop in Shillong by the Archbishop of Calcutta.

On November 26, 1935, the Pope transferred him to the diocese of ShiIlong. On March 14, 1936, he took possession of the new diocese, kissing the ground and entrusting its future to the Crucified Jesus.

The new Bishop asked his priests to go into the villages to preach the Gospel to the people. He continued to do this himself.
His apostolate was marked by the Salesian style: joy, simplicity and direct contact with the people. He approached young people, the poor and the needy. He accepted everyone in a spirit of loving kindness.

In 1972, he returned to Assam and consecrated the now completed Cathedral of the Archdiocese of Shillong (April 24, 1973). Back in Italy, the aging missionary bishop retired to the Salesian house of Quarto (Genoa).

In 1970, he wrote: "Here in Italy they often ask me: 'How did you ever leave Assam after 47 years of missionary life?' I reply: 'Because at long last, the day I longed for for 27 years has dawned, and the Church in India can now stand on its own two feet!"

He died peacefully in the Lord on June 20, 1978. Nine years later his beloved daughters, the Missionary Sisters of Mary Help of Christians wished to have the mortal remains of their founder amongst them again. Mgr. Ferrando's urn was placed in the chapel of the Convent of St. Margaret in Shillong, in the land which had become his second home.

The Salesian Congregation (SDB) initiated the Cause in 1997, in collaboration with the Missionary Sisters of Mary Help of Christians, the congregation founded by him. There were two diocesan processes, one in Shillong and the other in Genova. The process at Shillong was officially inaugurated by Most Rev. Dominic Jala SDB, late Archbishop of Shillong on 3 October 2003. The one at Genova was initiated on 27 May 2006.  Both the processes were concluded together in Shillong on 13 August 2006 at the presence of the Local Ordinary and Postulator General.